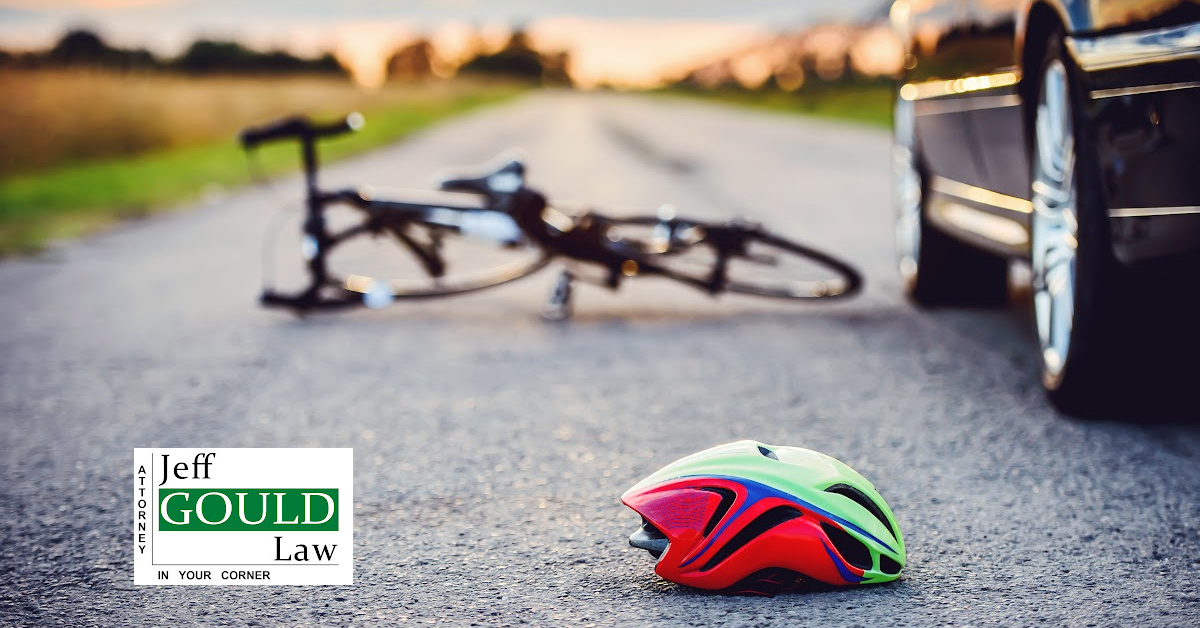 It’s an unfortunate fact, bicycle accidents are common. According to the National Highway Traffic Safety Administration (NHTSA), bicycle accident fatalities account for over 2 percent of all traffic-related deaths. Surprisingly though, hospital data shows only a fraction of injury-causing bicycle accidents are recorded by police. Whether you use your bike as your primary mode of transportation, you ride for exercise, or you are a serious cyclist, the reality is that you face risks every time you put your foot to the peddle. Did you know that for insurance purposes, collisions between bicyclists and vehicle drivers are considered “auto accidents”? At Jeff GOULD Law, we know anytime injuries result from carelessness or a reckless driver, it is grounds to pursue a claim for compensation. That means that if you’ve been injured in a bicycle accident, you could be entitled to collect damages to cover hospital bills, lost wages and other costs. In this article, we’ll take a look at some bicycle accident statistics, some of the most common causes and the laws that govern bicycling in Arizona.

An estimated 47.5 million Americans ride bikes. Here in Arizona, it’s easy to see why. Our clear skies and warm weather make this state a particularly ideal place for cycling. Unfortunately, the combination of bicycles and motorized vehicles sharing the road can be deadly. According to the NHTSA, at least two people a day are killed in bicycle accidents across the United States.

With a reported 32 cyclists killed and 1,371 injured, Arizona ranks as the 5th most dangerous state for bicyclists. And, Arizona ranks 7th on the list of highest bicyclist fatalities per capita coming in just behind California and New Mexico respectively.

Just like any other state, Arizona requires bicyclists to follow the same rules and regulations as motor vehicles. This means that bicyclists are required to obey traffic laws and stop for traffic lights and stop signs. You can find all of Arizona’s bicycle-specific laws outlined in Title 28 of the Arizona Revised Statutes. As an overview, here are some of the state laws to keep in mind when riding your bicycle:

In 2020, according to research by Outside magazine, there were around 700 cyclist deaths in the US, but that’s with COVID-19 cutting traffic by as much as 41 percent for months at a time. When a bicycle accident involving a motor vehicle results in injuries, there is a common misconception that it is the cyclist who is probably at fault. However, statistics show motorists are more often at fault. Let’s look at some of the most common causes of bicycle accidents.

Distracted driving is a leading cause of all types of vehicle collisions, including those involving bicycles. When drivers are paying attention to their phones instead of their surroundings, they are significantly more likely to cause dangerous collisions. Common forms of distraction include reading and responding to text messages, dialing phone numbers, talking on the phone, and using social media.

Drivers who follow cyclists too closely and who pass within less than three feet of a cyclist unnecessarily create extremely dangerous situations. Not only are these drivers more likely to hit cyclists, but they are also leaving cyclists (and themselves) with far fewer options to avoid collisions and other accidents.

Speeding increases drivers’ stopping time while limiting the amount of time they have to make decisions on the road. Although high-speed accidents are more likely to result in severe (or even life-threatening) injuries, even accidents at relatively low speeds (e.g., if a driver is speeding in a residential neighborhood) can be extremely dangerous for cyclists.

Drivers who are weaving through traffic are less likely to see cyclists who are sharing the road. However, even if a driver is not weaving, making any unsafe lane change can still be dangerous. Bicycle accidents involving unsafe lane changes and weaving typically result from drivers merging into cyclists’ lanes without first looking to ensure that the lane is clear.

At many intersections, drivers will have a green light to turn while still having an obligation to check for cyclists and pedestrians. Turning without checking for bicyclists is a frequent (and completely avoidable) cause of bicycle accidents at intersections.

Running red lights and stop signs is another common cause of intersection accidents. This is true in neighborhoods and suburban areas as well as in city centers and other urban locations. While running a traffic sign or signal is dangerous in itself, the risks are magnified when drivers fail to look for cyclists who have the right of way.

Individuals who make the decision to drink or get high and then get behind the wheel are a danger to themselves and everyone else on the road. Alcohol and drug impairment significantly reduce drivers’ ability to make smart decisions and avoid causing accidents, and far too many collisions involving cyclists are the result of driving while impaired.

In other circumstances, bicycle accidents occur due to user error. If a bike rider isn’t keeping their focus on the road, it can cause them to collide with a fixed object. Major impact with a fixed object can result in serious injuries if a bicyclist isn’t wearing protective gear.

Regardless of what happened, if you have been seriously injured in a bicycle accident it is important that you speak with a personal injury attorney as soon as possible. To schedule a free, no-obligation consultation contact the office of Jeff GOULD Law now.

Who is financially responsible for bicycle accidents?

Arizona allows for shared liability in accident cases. This is called comparative negligence. This means an accident can be partially both parties’ fault, depending on the situation. However, even if you were partially at fault, the driver of the vehicle may still be responsible for some of your injuries. No matter the situation there may be factors that weigh more heavily in your favor that can minimize your level of fault. Was the driver of the vehicle breaking the law as well? Were they driving under the influence? Did they do everything they could to avoid the accident? These and other elements all play into comparative negligence. That means, it is probably worth your time to discuss how the accident happened with a lawyer to evaluate the accident.

As you can see, bicycle accidents on public roadways can result from a variety of different factors. If you were injured in an accident, seeking financial compensation can be an important part of the recovery process. However, in order to seek compensation, you first need to determine the cause of the accident, and this means hiring a personal injury attorney to conduct an investigation as soon as possible. If you were injured in a bicycle accident, in the Tucson, Marana, Oro Valley or Sahuarita area contact us today!